(If you are interested in auditioning, but unable to attend on this date, please contact Mr. Shanley.)

Who: Woodwind, brass, and percussion instrumentalists in grades 9 through 12 who live in Linn County or attend a high school in Linn County and who participate in their school band program.

Audtion Material: Applicants should prepare a solo or solo excerpt for the audition; use of an accompanist is recommended, but not required. Audition pieces do not need to have a published band accompaniment.

For more information or to register, contact CRMB Conductor Steve Shanley at [email]conductor@crmuniband.org[/email].

You may audition for available full positions, or audition to be a substitute player. We do not have a complete list of available full positions yet, but we will soon and will share that information as soon as we have it. If you are already on the substitute list but haven’t played with the band for a while, or feel you’ve improved and wish to be ranked higher, you may re-audition this year.

The audition will take no more than seven minutes for wind players and 14 for percussionists. It consists of sight reading several selections chosen by the conductor.

If you are interested in auditioning, please contact Scott, our Business Manager, at 431-9649 or email him at this address: business AT crmuniband DOT org [make the appropriate substitutions there, of course. We want musicians, not spammers!].

The CRMB 2014 concert schedule is now up. Sure, it’s a long time from now, but thinking about a warm summer full of great music is getting me through this winter!

We have TWO Saturday concerts at the Downtown Farmers Market. We’re also performing in conjunction with the Freedom Festival and the National Czech and Slovak Museum and Library. We’re also playing at Hooverfest.

All concerts (except Hooverfest) are free to the public. C’mon down and check things out. Click here for the schedule.

The City Band Commission will meet in formal session on 26 January 2014 from 5 to 7 PM at Marquis Hall on the Coe College Campus. Agenda shall include a financial report, setting the 2014 performance schedule, and setting audition dates for open positions. This meeting is open to the public.

The city band commission will meet in Marquis Hall at Coe College at 7 PM on 10 November 2013.

The City Band Commission will meet in formal session briefly on 22 September 2013 at 7 PM in Marquis Hall at Coe College. This session is to discuss funding the search for a band logo.

After the formal session, there will be a work session to review applicants for our publicity and business manager positions.

The submittal period is closed. Resumes are under review.

If you are interested, please email your resume to the crmuniband email address. (This is a CHANGE from the earlier process.)

The City Band Commission will have a formal meeting on Sunday, 25 August, at 5 PM in Marquis Hall at Coe College. (This is the building on the back of Sinclair Auditorium. Signs will be posted to get you to the room, but you can start at room 105.) Agenda includes (but is not limited to) the post-season analysis, review of resumes for the Publicity Manager position, discussion of the resignation of the business manager, and review of budgets.

All concerned citizens are invited to attend this public meeting.

We’re in our final week of the 2013 season, and we have some great music to see everyone off.

Wednesday, we’re near the lagoon at Noelridge Park. Please note that some early copies of the schedule stated Bowman Woods, but that’s not available due to construction. This late in the year, it’s much cooler in the evening, so if you’ve been avoiding Noelridge due to heat…this is your chance!

Sunday night, we’ll bid the summer farewell at Ellis, one of our most popular venues. Come on out, relax, and enjoy the great view of the river. Downbeat for both Wednesday and Sunday is 7:30 PM.

Saturday night, the band will be in West Branch for HooverFest. We’ll be playing the music for the fireworks LIVE…and hey, where else can you see a great fireworks show this late in the summer? Saturday’s concert starts at 8:30, but there is plenty to see and do, with many activities for people of all ages.

The lineup for the parks concerts is: 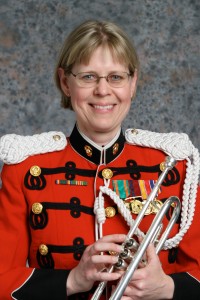 We have a special guest for our final week of 2013: Trumpeter/cornetist Susan Rider of Cedar Falls, Iowa, who joined “The President’s Own” United States Marine Band in July 1997.

Master Sergeant Rider began her musical instruction at age 10. Upon graduating in 1985 from Northern University High School in Cedar Falls, she earned a bachelor’s degree in music in 1989 from the University of Northern Iowa in Cedar Falls. She continued her studies at Indiana University in Bloomington, where in 1991 she earned a master’s degree in music and in 2000 earned a doctorate of music in brass pedagogy. Her trumpet instructors were Keith Johnson and Randy Grabowski of the University of Northern Iowa, and Charles Gorham and Edmund Cord of Indiana University.

Prior to joining “The President’s Own,” MSgt Rider performed with the Midland/Odessa Symphony in Texas, the Owensboro Symphony in Kentucky, and the Evansville Philharmonic and Columbus Indiana Philharmonic in Indiana. She also played in the Spoleto Festival USA Orchestra in Charleston, S.C., and was a substitute with the New World Symphony in Miami. In addition to performing, she also taught studio trumpet in Odessa and at Purdue University in Indiana, and was an associate instructor at Indiana University for the brass and music education departments.

MSgt Rider is a frequent soloist with the Marine Band, Marine Chamber Orchestra, and Marine Chamber Ensembles, and has appeared as a Marine Band guest soloist with groups including the Male High School Symphonic Band from Louisville, Ky., in 2001, the Atlanta Youth Wind Symphony in 2005, and at the Midwest Clinic in Chicago. In 2010, she was a Marine Band guest soloist with the Hannaford Street Silver Band and a Monarch Brass ensemble member at the International Women’s Brass Conference in Toronto, Ontario, Canada. In addition to her musical duties, MSgt Rider has served as a Tour Coordinator since 2003, advancing and serving as on-site manager during the band’s annual concert tour.

The Marine Band is America’s oldest continuously active professional musical organization. Founded in 1798, the band has performed for every U.S. President since John Adams. Known as “The President’s Own” since the days of Thomas Jefferson, the Marine Band’s primary mission is to provide music for the President of the United States and the Commandant of the Marine Corps.